The “boxy” nasal tip is a common finding that patients wish to change in a rhinoplasty. It is caused by nasal tip cartilages forming in a broad, squared-off shape when viewed from below. This often makes the lower third of the nose appear very large compared to the remainder.

The ideal appearance of the nose when looking from below is an equilateral triangle. In some people when you look at the nose from below the tip appears quite squared off and more trapezoidal in shape. Typically this shape occurs because the tip is wide and is referred to as a “boxy” tip.

How can do you improve a boxy tip?

A graduated approach to a boxy tip is best. This means in patients with fairly weak cartilages and fine skin a boxy tip may be corrected through a cephalic trim and the placement of stitches within the domes and between the domes (inter-domal and intra-domal sutures). Some domes require further sutures to flatten more lateral convexities. Very strong cartilages may occasionally need to have some of the dome itself removed and a new shaped created (a dome divison).

The most strong boxy tips require the lateral tip cartilages to be completely freed from all attachments, removed, reshaped and replaced. Small strips of septal or rib cartilage may need to be stitched along the undersurface to remove some of the excessive curvature and straighten out the shape. These are called lateral crural strut grafts.

Generally after changing a boxy nasal tip results are predictable and permanent. Results can be dramatic and can improve both breathing and appearance. 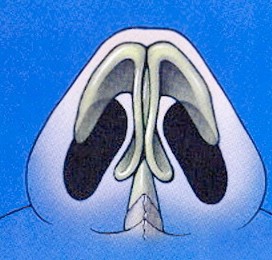