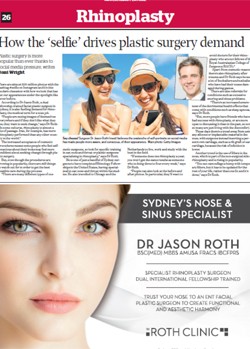 Plastic surgery is more popular than ever thanks to social media pressure, writes Dani Wright.

There are almost 300 million photos with the hashtag #selfie on Instagram and it’s this modern obsession with how we look that has put our appearances under the spotlight like never before.

According to Dr Jason Roth, an ENT specialist in Sydney, it is also fuelling demand for rhinoplasty, the medical term for a nose job.

“People are seeing images of themselves everywhere and if they don’t like what they see, they want to seek change,” says Dr Roth. “In some cultures, rhinoplasty is almost a rite of passage. Iran, for example, has more rhinoplasty performed than any other country in the world.”

The increased acceptance of cosmetic procedures means some people who feel self conscious about their looks may feel more confident about seeking change through plastic surgery.

But, even though the procedures are growing in popularity, there are still things to watch out for in order to get the best possible care during the process.

“There are many different types of cosmetic surgeons, so look for specific training in ear, nose and throat or plastic surgeons with a particular interest in rhinoplasty,” says Dr Roth. He is one of just a handful of Sydney surgeons to have completed Rhinology Fellowships in the United States, having specialised in ear, nose and throat within his studies. He also travelled to Chicago and the Netherlands to live, work and study with the best in the field.

“If someone does one rhinoplasty a year, you won’t get the same results as someone who is doing three to four every week,” says Dr Roth.

“People can also look at the before and after photos. In particular, they’ll want to avoid doctors for their rhinoplasty who are not fellows of the Royal Australasian College of Surgeons (RACS).”

Apart from cosmetic reasons, there’s also rhinoplasty after trauma and Dr Roth says he sees a lot of footballers and netballers who have had their noses damaged during games.

“But, more people have friends who have had success with rhinoplasty, or are more open to discussing it than in the past, so not so many are just living with the discomfort.”

These days there’s a trend away from using any silicone or implantable material in the nose, with surgeons instead inserting a person’s own cartilage, such as a rib graft or ear cartilage, because the risk of infection is lower.

Another trend is the use of fillers in the nose, which is part of the non-surgical side of rhinoplasty and is rising in popularity.

“You can camouflage a hump with temporary fillers, but it has to be updated for the rest of your life, rather than one fix and it’s done,” says Dr Roth.