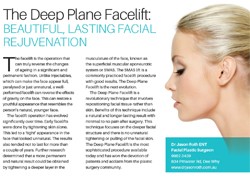 The facelift is the operation that can truly reverse the changes of ageing in a significant and permanent fashion. Unlike injectables, which can make the face appear full, paralysed or just unnatural, a well performed facelift can reverse the effects of gravity on the face. This can restore a youthful appearance that resembles the person’s natural, younger face.

The facelift operation has evolved significantly over time. Early facelifts were done by tightening skin alone. This led to a ‘tight’ appearance in the face that looked unnatural. The results also tended not to last for more than a couple of years. Further research determined that a more permanent and natural result could be obtained by tightening a deeper layer in the musculature of the face, known as the superficial muscular aponeurotic system or SMAS. The SMAS lift is a commonly practiced facelift procedure with good results. The Deep Plane Facelift is the next evolution.

The Deep Plane Facelift is a revolutionary technique that involves repositioning facial tissue rather than skin. Benefits of this technique include a natural and longer-lasting result with minimal to no pain after surgery. This technique focuses on the deeper facial structure and there is no unnatural tightening or pulling of the facial skin. The Deep Plane Facelift is the most sophisticated procedure available today and has won the devotion of patients and acclaim from the plastic surgery community.