Benign Paroxysmal Positional Vertigo (BPPV) accounts for approximately 20% of dizziness in people of all ages but can be as high as 50% of the cause in older people. The symptoms include dizziness or vertigo, lightheadedness, imbalance and nausea. Symptoms are typically triggered by certain head positions. The most common of these is getting out of bed or turning over in bed.

The Epley manoeuvre is an effective way of moving debris from the posterior semicircular canal back into the vestibule of the inner ear. It is known as a particle repositioning procedure. It involves sequential movement of the head into four positions, staying in each position for roughly 30 seconds. The recurrence rate for BPPV after these manoeuvres is about 30 percent at one year, and in some instances a second treatment may be necessary.

After this maneoeuvre you should carefully follow the instructions below which helps to prevent debris falling back into the posterior canal. 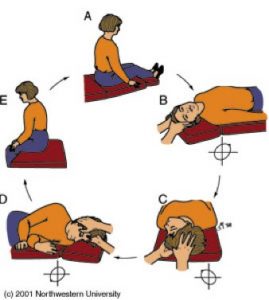 Instructions for after your Epley manoeuvre

1. Wait for 10 minutes after the manoeuvre is performed before going home. This is to avoid “quick spins,” or brief bursts of vertigo as debris repositions itself immediately after the manoeuvre. It is best if you do not drive yourself home.

2. Sleep semi-recumbent for the next night. This means sleep with your head halfway between being flat and upright (a 45 degree angle). This is most easily done by using a recliner chair or by using pillows arranged on a couch. During the day, try to keep your head vertical. You must not go to the hairdresser or dentist. No exercise which requires head movement. When men shave under their chins, they should bend their bodies forward in order to keep their head vertical. If eye drops are required, try to put them in without tilting the head back.

3. For at least one week, avoid provoking head positions that might bring BPPV on again.

Be careful to avoid head-extended positions and try to stay as upright as possible. Activities to avoid include

4. At one week after treatment, put yourself in the position that usually makes you dizzy. Position yourself cautiously and under conditions in which you cannot fall or hurt yourself. Fingers crossed, things have settled down.