The shape and function of the nose is supported by a delicate collection of cartilages and bones. These structures are held together by delicate ligaments. 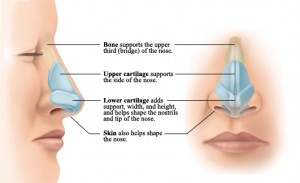 Broken noses & Injury to the nose can lead to both functional (breathing) and cosmetic problems.

If you feel you have possibly broken your nose or if you feel one or both sides of the nose is blocked after an injury it is important to have it assessed by a doctor. A blood clot called a septal haematoma can form within the nasal septum in the midline of the nose which may need to be urgently drained in order to prevent permanent damage to the nose. This needs to be addressed within about 48 hours after the injury. This initial assessment is also helpful in determining if there is a very obvious deformity that is probably going to need surgery to correct.

Often there is significant swelling of the soft tissues after nasal injury which initially makes it difficult to assess if the nose is crooked. Applying ice packs to the nose can assist in reducing this swelling over a couple of days. A follow-up visit at around 7 to 10 days if often needed to re-assess the nose once some of this swelling has subsided to decide if there is a twist or bend.

Any of the components of the nose can be injured. These include – the nasal bones, the cartilaginous or bony nasal septum, the supports for the nasal tip and nasal sidewalls (alar cartilages, upper lateral cartilages), the nasal skin.

The treatment that is required varies depending on the severity of the injury. Most injuries need to be corrected under general anaesthetic in the hospital. If the problem is a deviation of the nasal bones alone this can often be treated with a relatively straight forward manipulation. A bend or fracture in the septum can be corrected with a procedure called a septoplasty. More extensive injuries to the tip and supports of the nose may require a rhinoplasty.

Some doctors prefer to perform simple manipulations while the nose is swollen and then return for a second procedure 3-6 months later to perform small changes which are not always easily visible at the time of the initial injury. This is often a good approach with a major injury but does add some inconvenience to the patient who needs to have two operations instead of one. Dr Roth generally attempts to repair all injured elements of the nose in a single procedure.

It is recommended to make contact with a doctor to review your nose as soon as possible after the injury. After 14 to 21 days the nose has already laid down significant scar tissue and bones may have “set” into the new bent position. This requires them to be re-broken in order to straighten them. If a procedure can be organised earlier than this the bones can usually be relocated without having to re-break them.