A short upturned nose is a challenging nose to correct. The unflattering terms “pixie” or “pug” sometimes refers to this nasal appearance. A short upturned nose can occur from birth trauma or as an unfortunate consequence of a prior rhinoplasty procedure. The most important aspect of the surgery is to provide adequate support for the nasal tip in it’s new position so that it remains there for life.

Can an upturned tip be brought down?
Yes. If the upturned tip is a result of a previous rhinoplasty surgery it is possible to repair it. It is important that the existing scar is released to allow for movement of the tip in a less rotated position. If you are considering a revision rhinoplasty surgery it is important that you allow the post-operative swelling and nasal skin to relax first. But don’t leave it too long as the nasal skin will continue to shrink which can make it more difficult but not impossible to stretch it out over the newly reconstructed internal nasal framework.

There are several techniques that allow the surgeon to counter rotate the upturned tip. Listed below are a few of these techniques. 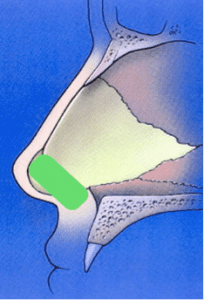 Caudal Septal Extension Grafting
A caudal extension graft is stitched to the end of the septum to lengthen it. A strong straight piece of cartilage is needed. This can usually be harvested from the nasal septum or rib cartilage. The graft is often also carefully stitched to the tip cartilages in their lower portion (the medial crura) to ensure that a very solid foundation is created.

Extended Spreader Grafts
Spreader grafts are small horizontal strips of cartilage that are sutured to the top of the septum for functional and cosmetic purposes. An extended spreader graft is one that extends from the middle third of the nose right down into the tip. This can be used to help lengthen the nose, de-rotate the tip and anchor it firmly in position.